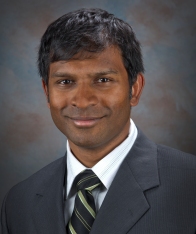 Pradeep currently holds a doctoral degree in Engineering from Memorial University and has broad expertise in the use of satellite Synthetic Aperture Radar (SAR) for marine and land-based applications, as well as management of research and operational ice surveillance and mapping projects for national and international government and commercial clients.

Pradeep Bobby first joined C-CORE in 2004 as a Project Engineer and over the years took increasingly responsible management roles.  In 2016 he began a leave of absence for doctoral research in theoretical modeling of electromagnetic scattering from sea ice ridges.  Now that he has completed his doctoral work, we are delighted to welcome Pradeep back to the C-CORE team.

Dr. Bobby succeeds former C-CORE Earth Observation Director, Thomas Puestow, who has recently taken a position with the National Research Council as Lead, Stakeholder Engagement, Ocean, Coastal and River Engineering.  We congratulate Thomas and look forward to working with him in his new role.