During northern winters, sheet ice can develop on water where there is little wind or wave action, such as sheltered ports and lakes, impeding navigation and threatening infrastructure. Aeration systems can be installed to prevent or limit the ice growth. These systems generate an upward flux, bringing warmer water from the bottom of the water column to the surface, mixing the surface water with the warmer sublayers. In freshwater bodies, warmer water tends to be present deep below the water surface due to the relation between water density and temperature. This energy can be brought upwards for ice control by installing an aeration system on the lakebed.

C-CORE has been working with Canadian Pond to quantify the performance of their Bubble Tubing® linear aeration system, essentially a flexible PVC air hose with perforations that uniformly disperse the air flow. To study and quantify the main physical processes involved in the de-icing system, C-CORE’s modelling and experimentation team developed numerical Computational Fluid Dynamics (CFD) and heat transfer models, then conducted a laboratory-scale test program, verifying the models and demonstrating system capability. 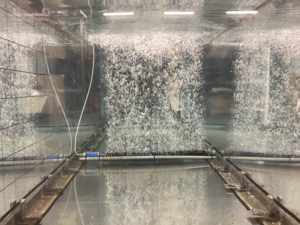 De-icing performance was tested by first growing a 25 mm thick layer of ice in an in-lab tank without using the bubbler system, then activating the bubbler system and measuring the decrease in ice thickness. During the lab tests, the temperature profile in the water was also measured, providing valuable insights to the effect of thermal stratification on de-icing performance. Saline water tests showed significantly different ice growth/decrease behaviour compared to the freshwater tests – an expected result because salt water does not stratify in the same manner as fresh water. Although the tests focused primarily on freshwater applications, data from the saltwater tests is useful for shipping-related applications or extended port operation in Arctic and sub-Arctic regions. 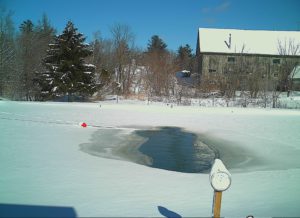 The lab-scale test program was followed by full-scale verification so that the CFD and heat transfer models can assist in ongoing optimization of the system’s de-icing efficiency and design for specific applications. Given the heat flux distribution induced by the Bubble Tubing®, the heat transfer model developed during the program can be used to predict the ice opening width and ice thickness depletion over time. Environmental data, such as from weather forecasts, may be incorporated to estimate the associated heat fluxes, and forecast the resulting ice thicknesses or opening width development for specific field applications.

Results from this program were presented at the Port and Ocean Engineering under Arctic Conditions (POAC) Conference in Delft in 2019. The technical paper in included in the proceedings of POAC 2019.